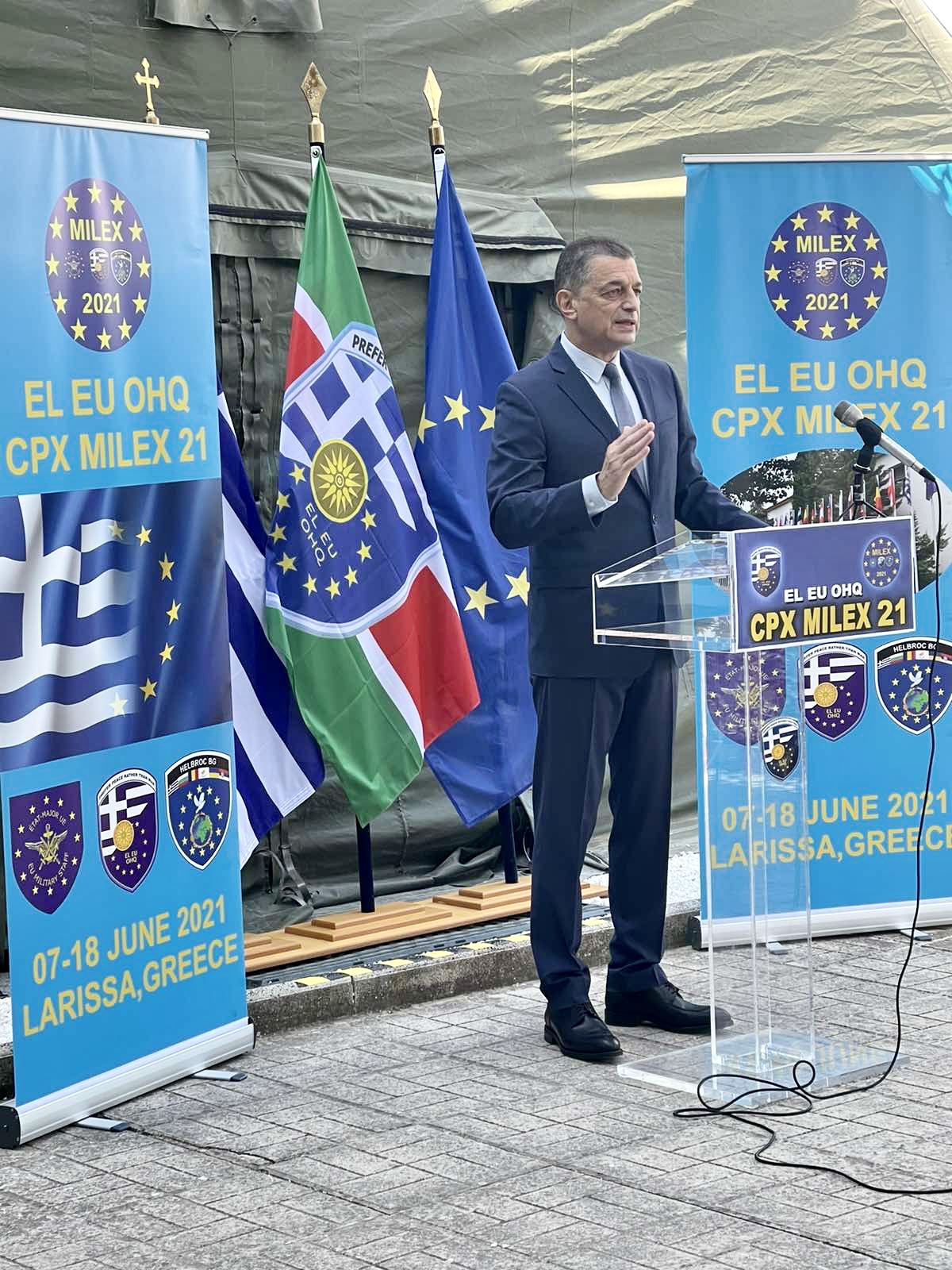 Today, Thursday 17 June 2021, the Deputy Minister of National Defence Alkiviadis Stefanis attended the Distinguished Visitors Day during the EU Crisis Management Exercise “MILEX-21”, at the Headquarters of the 1st Army.

The Exercise is conducted at the Hellenic EU Operation Headquarters, in Larissa from 7 to 18 June 2021, and it aims to train the personnel of the EU Hqs in the application of the European procedures of operational planning, in the field of crisis management at military, strategic and operational level.

The Deputy Minister of National Defence stated the following in his address:

It is a great honour and pleasure to be in Larissa today, within the framework of the DV Day of Exercise “MILEX-21”, at the headquarters of the Hellenic First Army/European Union Operation Headquarters (EU-OHQ).

Exercise “MILEX-21” is the largest-scale military exercise conducted by the European Union on crisis management, always within the framework of the Common Security and Defence Policy of its member states, which involves all competent civilian and military authorities.

The main objective of the exercise remains to practice and evaluate EU structures and mechanisms, as well as to improve their capabilities in crisis management, focusing particularly on decision making, planning, and the development and coordination of operational capabilities of all civil-military forces involved, both at strategic, as well as at operational level.

Having entered the third decade of the 21st century, it is a fact that global instability, geopolitical and technological competition, the shift of global power centres, the change of traditional national identities, and the spread of human networks are a few of the characteristics forming the global security environment, which is further complicated by the COVID-19 pandemic, an unforeseen factor that redefined the security framework internationally.

In this modern security environment, which is characterised by extreme instability, great interdependence, and delicate balances, the European Union is called to manage an agenda of particular challenges and hybrid threats, which become increasingly pressing and unforeseeable, such as military conflict, natural disasters, migration, religious fundamentalism, international terrorism, organised crime, cultural, political, and financial globalisation.

Given the above, the European Union as an actor of global reach, is called to follow a more strategic course of action, increasing its ability to operate autonomously in order to protect its interests and values, enhance resilience, and provide a feeling of security to its citizens.

In this view, and within the framework of the implementation of the Common Security and Defence Policy, new initiatives are constantly developed, always focused on the need to activate the national Armed Forces to provide assistance to the competent state authorities and fill any gaps found in terms of security and defence.

Greece, as the only country of the broader Southeast Mediterranean region actively participating as a full member in all international and regional security organisations and acting with undoubted geostrategic excellence, is involved in and develops synergies and policies promoting defence and security, making the country an undoubted pillar of stability and peace.

Always focused on international legality and European solidarity, it actively participates in all initiatives undertaken and greatly contributes to the shaping of the European Union’s foreign policy, in order to deal with existing conflict areas, consolidate peace, develop good neighbourly relations, and create the conditions for sustainable social and economic growth in a stable regional security environment.

The world around us changes at a frantic pace. It is a fact that changes taking place at the international level are rarely without friction.

Within this framework, the optimal use of every tool available and the harmonious development and use of each component of total power they can field is not a luxury or choice. It is a requirement.