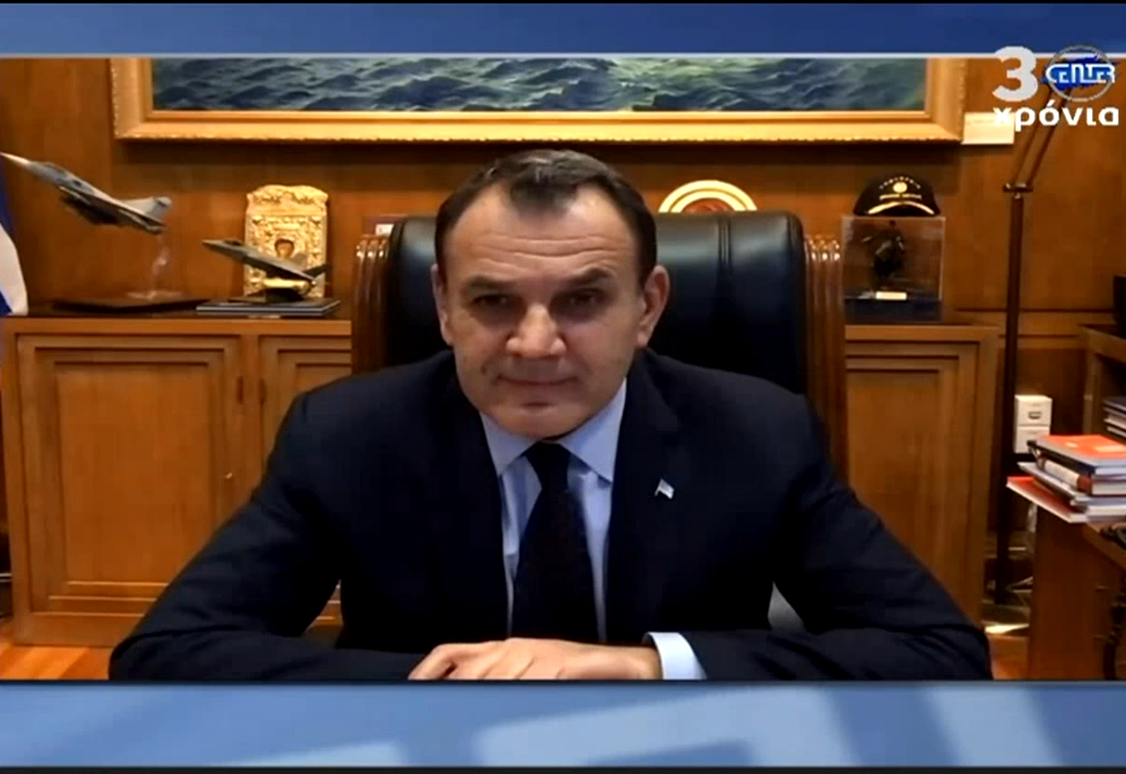 The Minister of National Defence Mr. Nikolaos Panagiotopoulos gave an interview, on 1 April 2021, to journalist Mr. Nikos Spitseris and answered questions about the latest political, diplomatic and regional developments. Key points of his interview are the following:

TELEPHONE CONVERSATION WITH THE US SECRETARY OF DEFENCE

“There is an optimistic attitude that the new US government approaches the whole grid of Greece-Turkey and of the security and stability system in the eastern Mediterranean in a different manner.

We are optimistic that Greece’s position will receive more attention. The strategic position of Greece and of the USA is at a very good point anyway. We can improve it even more. We are currently reformulating and improving the mutual defence cooperation agreement between Greece and the USA by adding some provisions which we are currently discussing with the negotiating delegations. Among other things, we are also considering a prolongation of the agreement and the addition of a statement related to a contribution towards us; all this is under negotiation”.

There is some détente, since, as it seems, an effort is being made to follow an approach so that a common understanding can be found. But this is diplomats’ responsibility. As far as the Ministry of National Defence is concerned, we do our best and we have begun a huge effort to enhance the deterrence power of the Armed Forces, which, in simple words, means to reinforce them. This is why we fulfill it quickly and transparently, because we can’t have the one without the other.

Of course, Turkey tries to achieve its own objectives, but we do our job too, through an intensive diplomatic activity to every direction which finds interlocutors eager to lend an ear to our arguments, because they have common views about security and stability in our region and in the Eastern Mediterranean, about threats and their source of origin. So, I think that efforts will be made to mitigate this behaviour of Turkey”.

PROCEDURE FOR THE PRIVATISATION OF THE PORTS OF KAVALA AND ALEXANDROUPOLI

“The procedure of the privatization has begun. I am referring to both these ports because the American investors always treat them as one subject. Alexandroupoli and Kavala have a particular strategic interest in the United States. I am in touch with at least one of the investor companies which informs me. I think that this procedure will be implemented in this year, so that the privatization of Kavala port will be completed; and I think that we can draw many benefits from this.

It will be a large investment in this region. We need these investments. I think that it will not be the only one to be initiated in the next two years, but, anyway, when a port with commercial activity which will definitely enhance, passes to the possession of investors with international profile and strategic interest in this region, it can only be beneficial for the local economy and other sectors as well”.

RESOLVING PROBLEMS OF THE REGION

“It is my duty, among other things, to be aware of the problems in my region. I do not resign from this duty, knowing the problems of my region and I do my best for it. I am in touch everyday with all the four mayors of the constituency of Kavala. I can tell you that I have spoken with all four of them within 24 hours with a view to initiating procedures to solve problems belonging to the competence of each one of them; and there are many such problems across the spectrum of society, particularly at these difficult times due to “Covid-19”.

In a working meeting with the mayor of Kavala Mr. Mouriadis, we decided on solutions for matters that he brought to my attention and he was also received by the Minister of Migration Policy, Mr. Notis Mitarakis, with whom he worked together to find solutions on issues related to the re-planning of the accommodation centre in “Asimakopoulos” Camp, and on the manner in which a deviation road around the camp could be built in compliance with the approved land division. Other solutions are under consideration too for issues such as Kalamitsa, the old Court hall etc. I see it as my obligation to assist the local governance, the mayors, if I can”.

“A funding for the line Prinos-Kavala has been secured. I believe that this connection should remain open – active because it connects the island of Thasos with Kavala, although some companies might consider it profitless.

In a cooperation we had with the Ministry of Shipping and the Minister Mr. G. Plakiotakis, it was announced that the subsidy of this line will restart in April. Later on, the tourist season will begin and traffic will increase again. But tourism should be supported with all means in Kavala and Thasos”.

“This year, Nymfaea should open and we should receive tourists from our northern frontier. We will work for this and we will submit our proposals. Since the vaccination at home will be continued and the population will be immunized and, since we can easily now have various tests at the check points, we can be optimistic about this.

Nymfaea should open this year if we want a reboot of the economic activity, which is mostly based on tourism in summertime. This year, economic and tourist activities should be restarted.

The government has made great efforts to financially support people who have been affected. Great amounts of money have been made available in the domestic economy. They did not satisfy all the needs, but I hope that several of them have been covered. We have the National Recovery and Resilience Plan which will start being implemented next summer. There will be some financial reinforcements with funds from the European Union and a stronger boost is expected when this money is released in the market. The economy must restart. This is a key prerequisite for anything else”.